The first day of our trip we spent on the Island of Floreana, which several people tried to settle on but neither of the attempts was really succsessful. Some people are living there nowadays, caught between wanting progress and conservation of the nature at the same time, of course this does not work very well. We could watch the conflict unfold in front of us, because they just started to build a concrete street from which maybe 3 families will profit. Why? Because the governor of Galapagos is from Floreana and therefore directs some funds to the island. From my point of view there is no need to spend that much money on a concrete street, when not even half of the population have cars, but who am I to judge. If Westerners would live there, they would want cars too. Somehow the education of the inhabitants about how to protect nature has not yet succeeded – but it is a difficult task to do that as a foreigner, people might reject the ideas just because you were not born there…

Well the first day only got interesting when we landed for a beachwalk in the evening at Cormorant Point. The visibility for snorkeling in the afternoon was pretty bad and I was sceptical if this trip was going to be special or not. Fortunately the beach at Cormorant Point was totally different to what we saw in the morning on the other side of the island. I would have liked to spend more time on this beach, watching the sunset properly and maybe even having dinner there or sleepin in a tent. But of course such things are not possible on the Galapagos and the itinery is made by the park office – we had to leave during the night to reach Española the next morning. 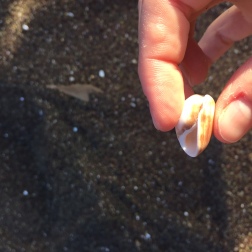 There should be flamingos here, unfortunately we saw only two quite far away 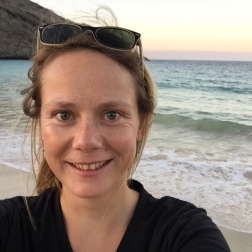 Selfietime on the beach of cormorant point 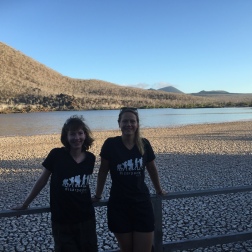 The flamingo lake at cormorant point

The next morning we had to get up very early – Breakfast was at 06:00 o’clock and will be for every day on the cruise, but of course it was worth it. We could watch the albatrosses do their mating dance – they only nest on Española. No chance to see them somewhere else on Galapagos. It was hilarious how they put their beaks together as though they would kiss or swordfight with each other would discribe it maybe better *laugh*. The male albatross takes the first step – more or less like in the human world? These birds can only support to raise one chick at a time because both parents need to fish for its greedy hunger. Not so the Nasca Boobies we saw later on the same island. There the parents do have two eggs, but one of the chicks has to kill its sibling during the raising if not both will not have enough food to survive. Nature is cruel… 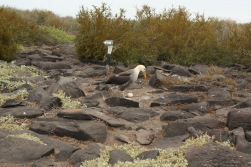 an albatross with its egg

only the skin of a snake

how cute is that? A cudlly sealion baby

In the afternoon went snorkeling but he visibility was still not much better. Another beautiful beach with sealions, whalbones, stingrays and pelicans fishing made it up though. Another day going to end on the galapagos with an incredible sunset and a talk about geology of the islands which was optional but we tried at least to listen without falling asleep 😉

This was once a whale

Making a video for our travelagency 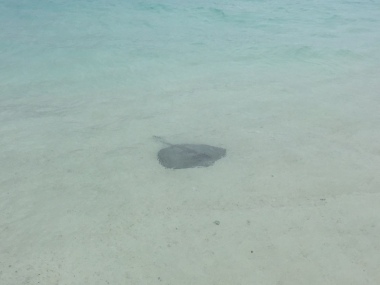 The stingray pretty close to the beach